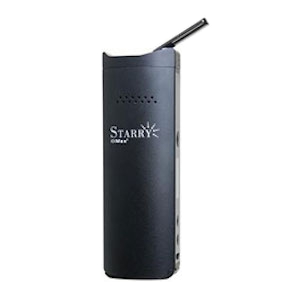 The XMAX Starry Vaporizer might be the answer to your prayers if you vape on a budget. Fitted with all the modern features that you can expect, the XMAX Starry is one of the best values available to the contemporary vaper. One of the problems that many people have with buying a budget vaporizer is the worry that it won’t be powerful enough to get the job done. Go ahead and put that fear to rest now, because the XMAX Starry dispels that rumor with raw vaping power. The XMAX Starry is so good that they produced a second version, the XMAX Starry V2.

i Product NOT tested yet by Vapospy

The XMAX hails from a line of Chinese-made vaporizers that have been around for about a decade now. Knowing a product is from China allows you to assume two things:

Both assumptions are right about the XMAX Starry. It is small, discreet and capable of producing gigantic clouds of vapor. Some vaporizers cost three times as much that it equals in power and features. Everything about it is standard to the vaping industry: it utilizes a 18650 power cell with 2,600mAh capacity and is powered by a micro-USB charger, it also features a sturdy anodized aluminum body that can fit right in your pocket. As an early adopter of this model, you can benefit from their desperation to get more of these products into people’s hands. Get one today before the secret is out!

Full Ceramic Pathway
One of the best aspects of the Starry is how everything that touches your herbs will be toxin-free ceramic, right down to the mouthpiece. It ensures that you taste the materials you want instead of the ones inside the device. The oven is also ceramic, and it puts the Starry into a class of its own when you consider the value it possesses. The first thing you notice about this device is the solid build quality. There are dozens of vapes that cost about as much as the Starry, yet so few of them can boast an aluminum body and a ceramic pathway like the XMAX Starry. Not only that, but it comes with a concentrate insert too!

Fast Heating
Again, the heat-up time of the XMAX Starry Vaporizer is far and above what you would expect from its price. The Starry can reach a vaporizing temperature in around 25 seconds. There are some, twice the price, that take a full minute! Everything about the operation of the device is simple, as well. The mouthpiece and oven-lid are connected by strong magnets, allowing you to quickly load and unload your herb, wax, or oil. Not only that, but the battery is also a breeze to replace as well. Naturally, pop the cap off, and it will come right out. Neither the lid nor the battery is loose enough to come off from a fall, so you can rest assured your herbs will be safe.

Flavor on a Budget
The Starry is excellent at keeping your vapor smelling like herbs. It will not taste like plastic, metal, or smoke. Other than the fully ceramic pathway, a massive factor to its success is the OLED display and refined temperature control that comes with it. The screen shows you the battery capacity, desired temperature, actual temperature, and it even comes with a shutdown timer to keep the device safe from the horrors of combustion. The XMAX Starry can pull it off while being kind to your pocketbook too.

Weather Update: Cloudy
The most surprising aspect of the Starry, however, is the stellar vapor production. Again, the worst fear of a vaporizer-enthusiast is that their new vape won’t be capable of creating the vapor clouds that you crave. There are no worries for the XMAX, though. The cloud production of the Starry has been compared to the PAX 3 Vaporizer, a much more expensive vaporizer! It may not have the highest vapor volume of any portable vape, but for the price, it just might be the best combination of value and power. You can customize the levels too. If you want bigger clouds, you can crank the temperature up to anywhere between 100 °C – 240°C. Even for the highest temperature, your herbs will get there in around 30 seconds.

Check out the review of the XMAX Starry by Bud. This little vape is undoubtedly starting to turn heads (no pun intended) with its power and value, a deadly combination.

Whatever you might think about inexpensive vaporizers, stop it. The XMAX Starry does whatever it wants. Thankfully, it wants to be a powerful vaporizer made of high-quality components at a super reasonable price. It is a well-engineered portable vape, complete with OLED screen, that can fit in your pocket and blast large clouds of vapor. That should speak for itself.

Note that there is a newer version known as the XMAX Starry V2. 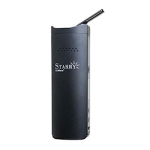 » Check out the newer version «

The long-running production of XMAX vaporizers continues with the new and improved XMAX Starry V2. As the predecessor to the original Starry, ...

Visitors, who took a look at this product, also saw these products:

We use cookies to ensure that we give you the best experience on our website. If you continue to use this site we will assume that you are happy with it. OK