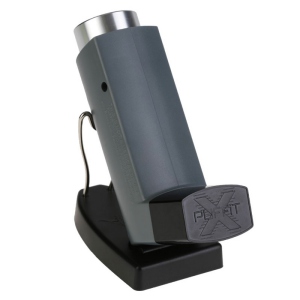 The PUFFiT-X is perhaps the easiest convection vaporizer to conceal, especially if you’re the type of person that likes to take their vapor on the road. Pull it out and have a session anywhere you want, thanks to the unconventional medical inhaler look. The PUFFiT-X prides itself on being the first one of its kind to also come with forced air feature in such a portable package. Thanks to this, the vaporizer has one of the most comfortable draws available from that system.

The PUFFiT-X is a rebirth and has evolved a lot since the original PUFFiT vaporizer was released. Discreet Vape was pleased with the reaction and decided to go back to the drawing board to provide some great new features. The appearance of the PUFFiT-X is the most prominent factor; an inhaler goes a long way to hiding in public places.

Powerful new features
Certainly, Discreet Vape has done their homework with this new device and tackled some of the main issues people have with the original PUFFiT or the PUFFiT 2. In detail, one of the problems was the difficulty in getting vapor out of the original device. The PUFFiT-X solved this problem by adding a fan inside that will force the vapor out in a more satisfying way. The PUFFiT-X has 8 different heating settings ranging from 150°C to 220°C. All of this heat is available after only 30-45 seconds of heating up.

Micro fan
Part of the appeal to having forced air in the PUFFiT-X is that it allows you to commit to the “inhaler” deception fully. There’s no huffing, puffing, or coughing involved. Even the fan can be set to a lower setting, eliminating almost all the noise it made. Pre-load the chamber and puff while you go.

Discreet
Not to mention, the PUFFiT-X has design features that make it one of the world’s most discreet portable vaporizers. Also, it can fit quite comfortably in a closed-fist grip due to its diminutive height. What’s more, the device has a size of a large key fob or a tiny remote control. When you aren’t using its stealth functions, it also comes with a handy stand to charge and display your device.

Rapid charging
For vapor enthusiasts, the best aspect of the PUFFiT-X is convection heating. Furthermore, with an additional fast charging feature, it makes everything even better. The PUFFiT-X battery lasts for about 2 hours, which should be enough for an entire day of vaping. However, the best part is its ability to charge to about 80% power in around an hour.

The following video showcases all of the great features of the PUFFiT-X. In fact, the design itself is something that you need to see in action. It’s also handy to know how the separate parts fit together.